The second CONNEXT transnational partner meeting took place in Karlstad with 50 participants from Belgium, Finland and Sweden. The aim was to continue learning from each other, share knowledge and experiences as well as get further training on game-based learning. 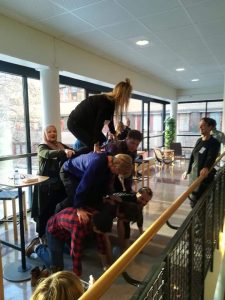 The first partner meeting day focused on everyone getting to know each other and in the morning Artevelde and Metropolia hosted some fun and energetic getting-to-know-each-other exercises. We found ourselves speed dating, innovating new ways to use pantyhose and building human pyramids.

Sofia, who teaches Swedish for immigrants, introduced #WORK Sweden and talked about the local adaptations made to the game as well as her experiences with the game, and the challenges and possibilities that she sees. We got to meet two of the participants in CONNEXT Sweden who have been part of the #WORK co-creation process.

After lunch it was time for everyone to experience #WORK for themselves and the Swedish Core Trainers hosted a Game Session with 15 missions and 14 teams, and for a couple of hours the center of Karlstad was filled with people competing and talking about work!

The local radio station accompanied one of the teams and made an interview with one of the Swedish Core Trainers (in Swedish).

The local news paper also followed one team and published an article. The feedback and evaluation session after the game showed that people had enjoyed themselves and that they had bonded with their fellow team members.

A fun and intensive first day ended with an informal get-together with a buffet and a beautiful Luciatåg with children singing traditional songs, paving the way to Christmas. 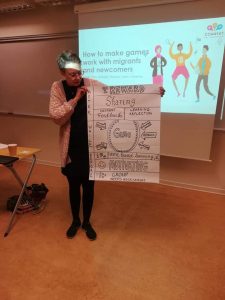 The second day had two parallel programs that merged in the late afternoon. The Swedish delegation had a special program for train-the-trainer for the 8 Swedish Core Trainers in combination with training for 13 new Game Masters.

In the meanwhile, the Flemish and Finnish delegations were working on topics related to the learning network in CONNEXT. The aim was to create a common understanding of the learning network, as well as discussing different themes in relation to working with gamification with migrants. The role of gender in game based learning was also addressed. Discussions from these working groups will be documented in a handbook published towards the end of the project. In the late afternoon the sessions merged, and we had a very fruitful session working together on the learning network.

The third day was busy with many different topics, workshops and study visits on the agenda. Before lunch we got to listen to good practices in relation to games and we had one workshop on measuring impact, and one workshop on co-creation in games. 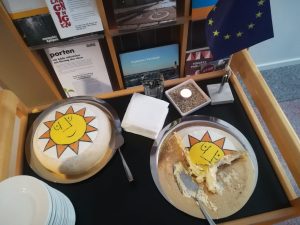 After lunch the participants had a choice to visit ESF-projects and other places working with migrants and youngsters. For example in Värmland Tillsammans project we heard about intensified support provided to migrants far away from the labourmarket and different ways of learning Swedish. Followed by project Värmlands Framtid an educational material called 7TJUGO® is still in use providing youngsters meaningful things to learn for 16 weeks. We ended the day with a study visit at Plaza Hotel, which gives on-the-job-training to newcomers as part of Match2job project and made a brief evaluation of the three days together.

On the fourth day the transnational project team and steering group had a meeting to, among other things, talk about the project meeting in Karlstad, work on assessment and evaluation, discuss the handbook and dissemination of the project and plan for the next meeting in Helsinki in March 2020.