Acceptable behaviour for a girl, men taking care of babies, diverse career options for women, gender minorities as part of our societies… Gamification can be used to address various gender related themes. Because gender is a sensitive topic, it’s important to ensure sufficient support for reflections also when working with migrants and other newcomers.

During transnational CONNEXT meetings professionals have discussed how to incorporate gender into CONNEXT games. How to take cultural differences into account? What kind of game tasks would be simultaneously useful, effective and fun? Should there be separate games on gender or should the theme be mainstreamed in each game?

Gender is a very personal matter, which links with our values and identity in a complex and sensitive manner. It is also a very political matter, which has to do with human rights and equality. Particularly when discussing gender with newcomers and other migrants, a right balance ought to be found. While everyone has the right to formulate their own perception on gender, it’s also of outmost importance that everyone is aware of their rights and the potential new roles in view of gender they are entitled to. Connecting gamification with gender brings an additional challenge, because some perceive games as something light and playful, even superficial and childish.

During a CONNEXT training in Karlstad participants played #Work Sweden, which supports migrants to find a job. One mission included interviewing passers-by on what kind of job contracts they had had in their jobs. One elderly woman, who didn’t speak Swedish very well, was sorry not to be able to help us, as she had never been paid for her work.

This incident is a good reminder of the need to be sensitive. While playing a game in a diverse group, even defining what does work mean may be necessary. Somebody may have felt great pride in being a house-wife and a mother of four children, while in the new context this experience may have started to feel worthless. Through game playing the value of any activity that may have strengthened skills and given joy can be emphasised.

In the end, #Work Sweden game seemed to be a delightful experience for the interviewed woman too. We discussed that taking care of children and the household is definitely a full-time job and very valuable as such. There was a bright smile on her face when she walked away and hopefully a hint of more courage to think about the Swedish labour market as well.

Gamification can be used to support participants to become more aware of how gender is reflected in and what impacts it has on our societies. It’s possible to get started for example with a simple game task, where a picture is shown to participants and they are asked: “What do you see?”. 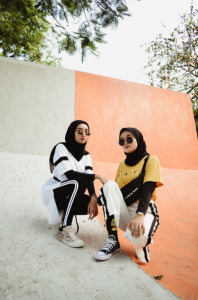 This method was tested by Girl’s House in Finland in a culturally diverse group of girls with a picture of young hip hop women in a scarf. While the expectation was that the participants would pay attention to the clothing, eventually they were much more passionate about the manly postures of the women. The wrap up discussion in the end facilitated by a professional was very fruitful. What is suitable behaviour and physical appearance for a girl? Who defines what is suitable?

Everyday observations and related reflections can be powerful tools in promoting awareness on how gender is reflected in our surroundings. A game task could be for example as follows:

As participants have carried out the game tasks, it’s necessary to reserve enough time for sharing observations and joint reflections. Without professional facilitation and proper closure there is a risk that the game doesn’t diminish stereotypical gender thinking, but even strengthens it.

It’s common that gender isn’t perceived as a topic that needs a lot of attention. Therefore developing entire games dealing with gender may not be meaningful. Instead gender could be mainstreamed and individual game tasks on gender could be inserted in every game. For example if the game dealt with physical activity, one task could be on suitable sports for different genders. If the game introduced a city or an organization, one task could be on how different genders are portrayed or taken into account there.

It’s good to keep gender in mind in the game preparation process for example in the following ways:

CONNEXT is working on individual game tasks on gender and will publish them towards the end of December 2020.