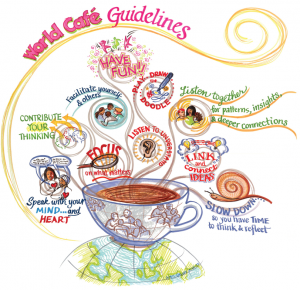 First, the importance of cross sectorial training for professionals on horizontal perspectives to make sure that the professionals are not emphasising stereotypes was discussed. We should be careful when talking about cultural differences in general and instead try to identify the core of the topics we want to discuss. Perhaps it’s the gender spectrum and redefining gender roles that we should be talking about instead of cultural differences? How to we work with career counselling? Are we being gender sensitive when we talk about the possibilities for women and men when it comes to different education and jobs?

The group discussed also the importance of always thinking twice before separating groups for different activities. We need to make sure that we don’t create more segregation in our attempts to integrate. Separate groups could initially be beneficial to create trust, getting to know the group and identifying different needs, but the aim should eventually be to work towards integrating different groups.

A good example of working with integration and inclusion is through positive role models and mentors. By creating opportunities for people to meet and to get to know each other beyond gender, age and culture we combat prejudices and create a better understanding for each other’s differences as well as similarities. This also gives people a chance to start building networks that can be very useful when it comes to practicing the language, understanding society, finding jobs etc.

One practical example of how this could work was presented by one of the participants from DUO for a JOB. Their aim is erasing disparities and inequality in access to the labour market for young people with an immigrant background. DUO fully values the experience of our elders, breaks down age barriers, encourages inter-cultural and inter-generational activities through a mentorship programme. Simultaneously it combats stereotypes such as ageism and xenophobia, by recreating close social ties based on understanding and solidarity.

The use of ambassadors is another good example that could inspire and motivate people, as well as strengthening the ambassadors themselves.